"The marble not yet carved....

...can hold the form of every thought the greatest artist has" - Michelangelo.


Last week I went to visit the studio of one of our artists, Paul Vanstone, following delivery of one of his pieces to a client to see his range of available work and feel utterly emasculated by my choice of career.  Where I merely curate artwork he carves exquisite pieces out of enormous slabs of solid stone.  I derive some solace in the knowledge that, having made some pretty average FIMO models for my nieces, I'm fairly sure my career in marble carving would have ended in bankruptcy. 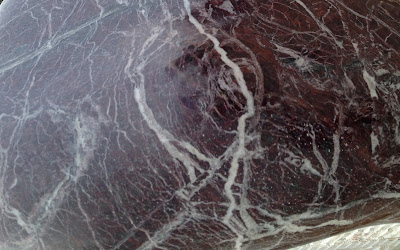 Marble need not be pure, white and virginal - deep burgundies or rich greens may be better suited to certain spaces. 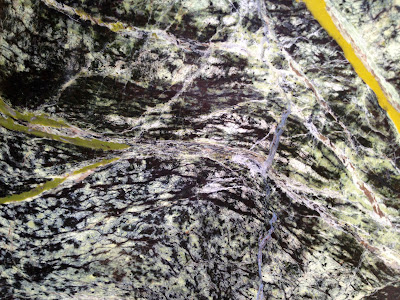 Paul gathers such stone from all over the world; rajasthan marble, iranian onyx, italian marble from quarries in Carrera.  Enormous sections lie stacked higher than head height, roughly drawn chalk outlines hint at the forms he sees hidden in the seams.  Next to them stand roughly hewn shapes, a first pass at uncovering the latent forms. 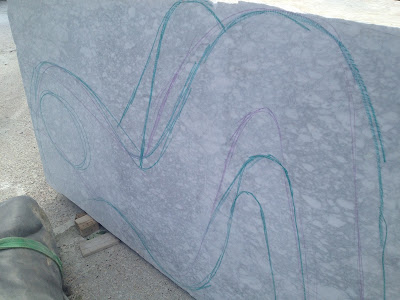 A large section of Italian marble ready to be worked

Paul work is hugely varied, however a large number of his pieces are abstract figurative forms or cloth folds.  Both are hugely tactile and skirt the line between classical and contemporary.  The folds nod at busts wearing Roman togas, the layering and scale however seem strikingly modern. 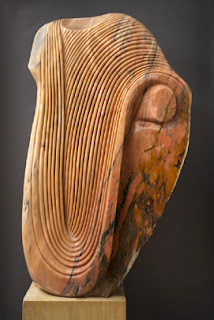 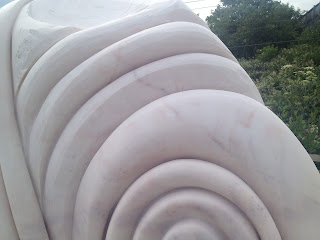 The figurative works are shaped from a range of stones, onyx, marble, vivid and vibrant colours through to muted and serene natural tones of green and black.  Smooth stone is warm to the touch and almost 'soft', I find that the sinuous shapes Paul loves demand to be stroked which, especially in the case of the female figurative pieces, gives the work a subtle sensuality. 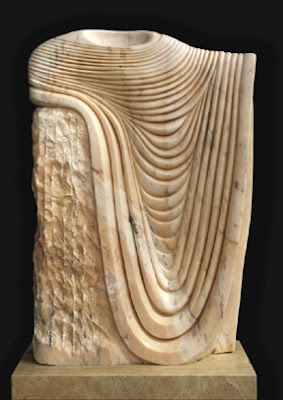 The bollard on the far left of the image below came from a 50 year-old seaside breakwater, giving a heft and aged look that one could not replicate with modern materials.  Innovative, sustainable, love it. 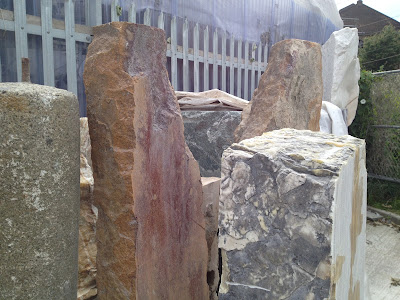 Paul gathers stone from all over the glove to sculpt or to use as interesting and varied plinths.  Much of his stone comes from beautiful Italian quarries, if our clients so choose he will take them for a day trip out to Carrera to go and see where the marble originates from, lets them select a specific piece and then creates a unique and bespoke artwork.  If you would like to know more about this service then drop us an email at sculpture@marshallmurray.co.uk. 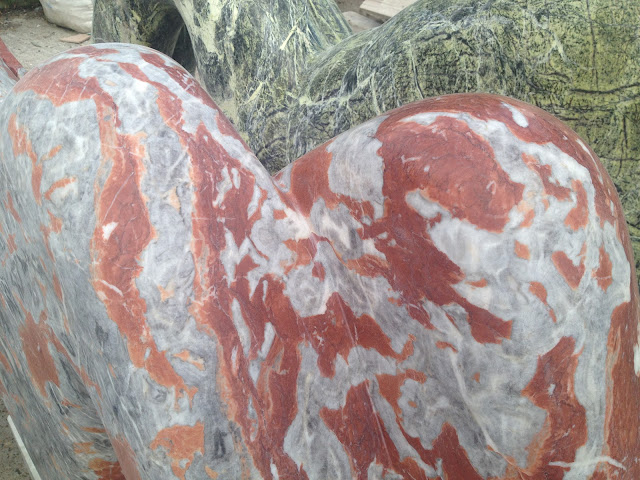 On Form in rural Oxfordshire 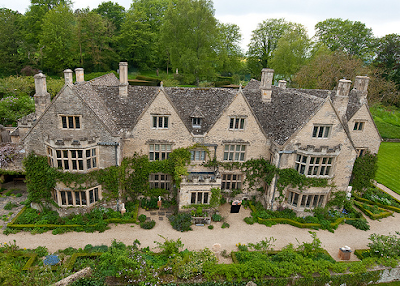 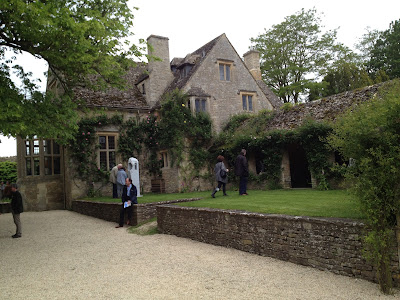 Asthall Manor is a beautiful house in 6 acres of historic garden, nestled in a beautiful part of rural Oxfordshire.  Every other year, for one month only, the grounds and house are filled with stone sculpture and the gates thrown open to the public for an exhibition called called "On Form".

I was fortunate enough to visit the exhibition on opening day, the perfect antidote to the grey and dreary "British Summer".  One of our sculptors, Paul Vanstone, was showing a selection of his works so I came to offer support as well as to see to if there were any other British artists whom I would like to represent. 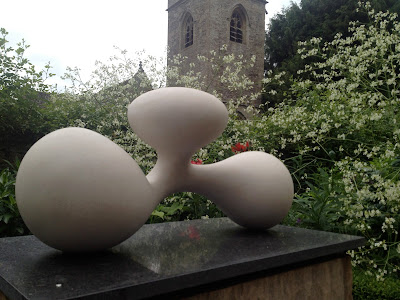 What struck me was the quality of the curation; every piece seemed perfectly suited to its background and framing.  Nothing seemed overcrowded, despite the high volume of pieces.  The layout of the grounds lent itself wonderfully to showing variety of art - the formal lawns and sculptural earth banks a stark contrast to the simple mown paths that cut through long grasses, wildflower meadows and low weeds. 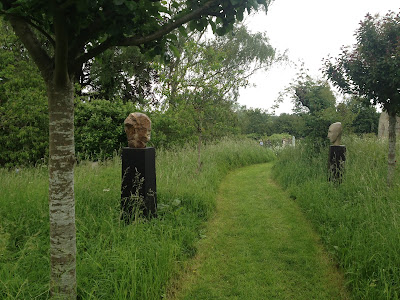 The layout reinforced my belief that the best 'gallery' for exterior sculpture is simple, natural planting uncomplicated and understated.  The pieces that worked best did one of two things brilliantly; they either picked out colours/ forms in the backdrop and represented them in an abstract way, or they were so alien to their location they demanded attention and consideration. 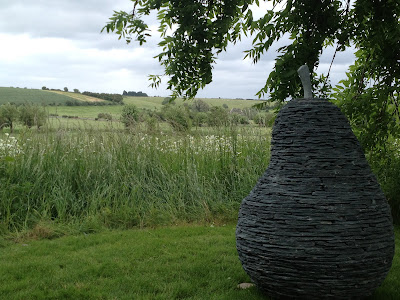 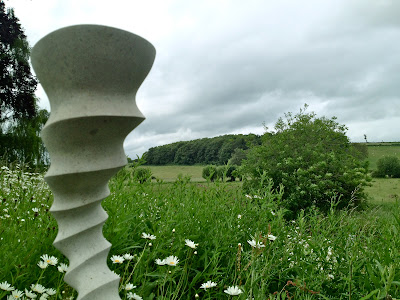 Another Guy Stevens, "Vortex" shares little with the surrounding scenery other than tone

Another success of the show was the degree of interactivity between sculpture and the public.  Small children rolled down Charles Jencks-style landforms, suspended rock sculptures on pulleys had all ages playing with the levels.

Some sculpture was partially hidden, I assume that these were the permanent installations lurking in deep planting as seasonal treats. 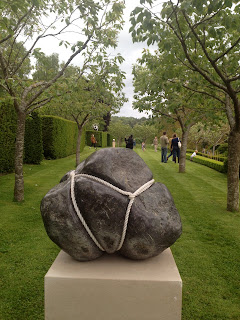 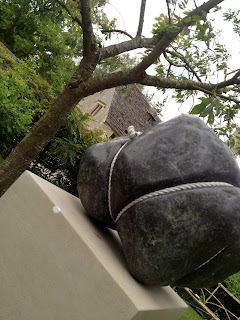 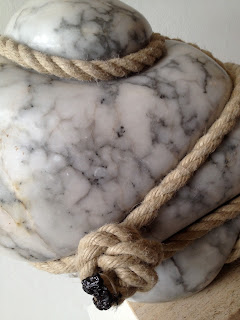 Peter Brooke-Ball, these are so simple but just great.

The show runs until the 15th of July, if you have any interest in exterior artwork then I'd highly recommend seeing the exhibition while you can.
Posted by Marshall Murray at 04:36 No comments:

Escape to the Country.


A very exciting opportunity for Marshall Murray has presented itself, so I thought I'd give you all a heads up.

Riverhill House is a gorgeous Kentish estate with fantastic views across the Weald and an historically significant garden.  Bought in 1840 by John Rogers, a contemporary of Darwin, due to the perfect conditions present for growing exotic species on the lime-free soil and south facing slopes.  He sponsored expeditions to the Himalayas to collect seeds and specimens which, despite the hazards and very basic equipment available, flourished in the Kent climate. 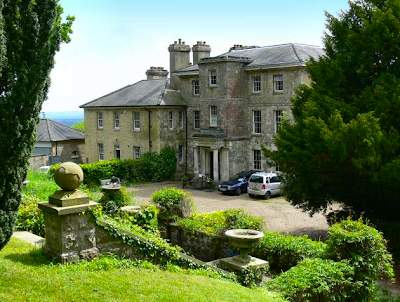 The house grew and thrived up until the First World War when, due to the changes in society that saw the price of labour increase dramatically, the numbers of staff available to maintain the house started to dwindle.  The estate began a slide into disrepair; the world-class gardens fading as hedges slowly became oppressive trees, seas of weeds ebbing and flowing over the once proud gardens, eroding the walls and blanketing the lawns.  Left to their own devices, in acres of increasingly wild woodland, the azaleas and rhododendrons flourished in the shade. 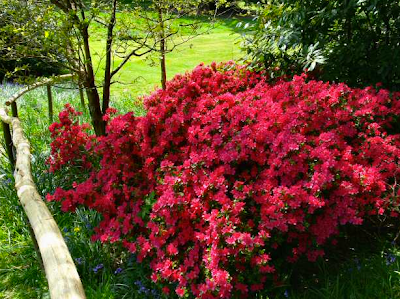 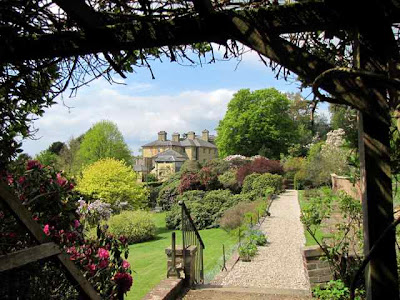 Successive generations managed the gentle but inexorable decline of the estate, eventually opening the gardens to the public to generate revenue, albeit to a limited degree and with a less than commercial approach.  Wind the clock forward to 2009 and the estate was featured on Channel 4's "Country House Rescue" which, allied with the current owners' open and progressive approach, has seen a dramatic turnaround in the fortunes of the house and grounds.  Edward and Sarah Rogers have begun a fascinating programme of renovation and reinvention, the show is well worth a watch:

I met with Sarah to discuss a partnering between Riverhill and Marshall Murray and I think it presents a very exciting opportunity for all involved.  We can offer world class British sculpture, they can offer a stunning setting and steadily rising footfall in a very affluent part of the country.  Our shared ambition is to create a platform for British artists, a rotating gallery of exterior pieces of both art and furniture.  The wide expanses of open ground and quintessentially English views are a wonderful gallery wall on which to hang our work. 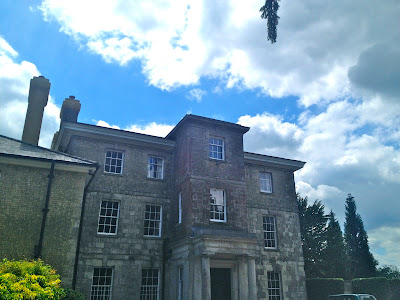 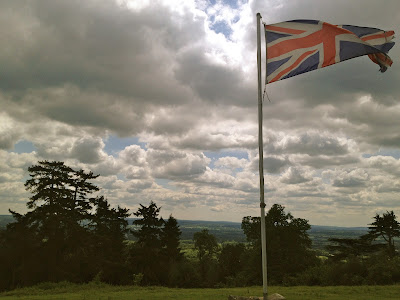 We shall look to offer opportunities to up and coming artists alongside the more established, mixing mediums and influences to offer a wide range of beautiful scenes.  There are a number of buildings that could become temporary studios, woodland walks in which to nestle hidden art, crumbling cellars that could hold pop up galleries - the potential is unlimited and my enthusiasm unbounded.  The Rogers are art lovers and passionate about the project on which they have set out.  It is a fascinating time to get involved with the realisation of their ambition for their home, the plans in place are as exciting as the ideas still loosely formed.

This may just be the start of a long and exhilarating partnering, I'll be sure to keep you all posted and hope to see you at one of our future events.


Posted by Marshall Murray at 14:16 No comments:

What an extraordinary week. 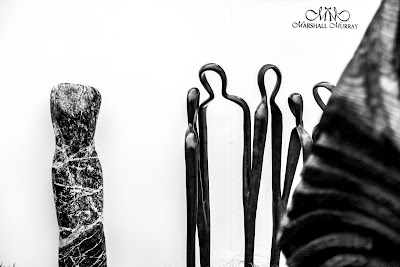 Hard to believe that the show is over, what an utterly fantastic week.  The build up phase was tough but fun, largely due to my world-class build team who put in some mammoth shifts with only comedic grumbling.  The show week was a blur but I loved every moment of it, discussing sculpture with the public, designers, architects and artists.  Our pieces were hugely tactile, seeing people react to them was extraordinary - touching, smelling, one man even hugged our sequoia dodecahedron. 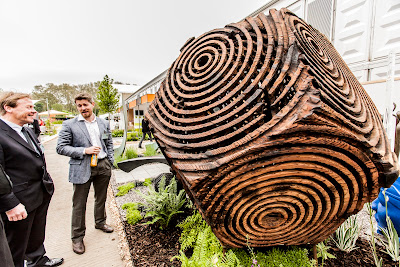 During the build the whole site was a buzzing hive of controlled energy, the lengths some organisations had gone to to install beautiful spaces for such a short period was truly breathtaking and inspiring.  Huge excavations, fully realised water features and walls, monstrous construction machines and armies of helpers swarmed across the site.  The feeling was one of 'all in it together', everyone pitching in and offering help or materials where possible, from the largest designers to the first timers like us.  Andrew and Joshua poured their hearts into the build and their focus, bordering on obsession, was incredible. 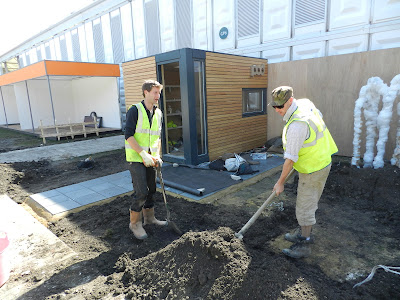 The long days seemed to fly by, everyone involved was buzzing from the overload of stimulae; the monster cranes and scaffolding puncturing the sky, the speed with which master craftsmen were constructing walls, paths, streams, if you could not get energized around these people then exterior design is possibly not for you.

We completed our build a day before the deadline and I must say that I felt a paternal sense of pride in my new baby.  The elegant pathway, contemporary office, gorgeous sculpture and surprisingly thin planting (the invoice for plants suggested that I'd have far too many) all looked rather wonderful.  The weather reports could not have been better, my shoes were polished and alarm clock set for an ungodly hour.

The week then seemingly flew by in about 12 minutes. 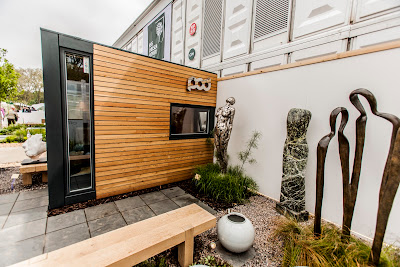 Looking back I can see that a lot happened, I met Rob Brydon, Andy Sturgeon said that he thought one of our sculptures was incredible (I almost punched the air but played it cool).  We were invited to show at the Philadelphia Flower Show, the largest in the US at 350,000 people, following a chance meeting with the organisers.  Hugely exciting, we plan to do a series of shows up the east coast after the show ends.  The Queen very nearly walked past our stand, which would have made for a fantastic photo, but she swerved at the last.  Goldie fell in love with Walter Bailey's work, James Purefoy and I had a 'Sequoia Fact Off', we sold several pieces and made some great new friends. 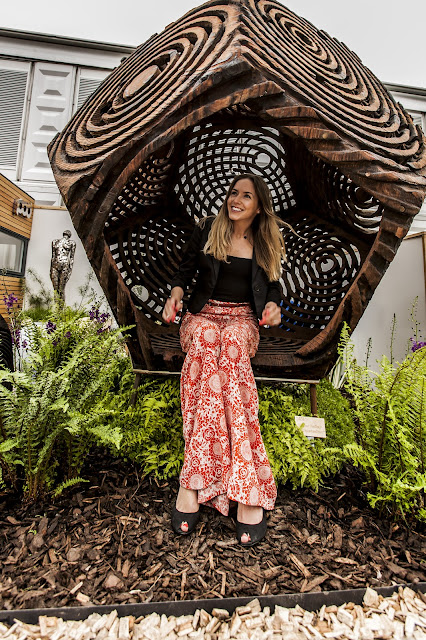 My talented and glamorous assistants during the week were fantastic; Verity, Sophie and Heather were the epitome of relaxed charm.  They helped shoulder the burden during the stressful periods and mocked me when I became repetitive/ overly excited. 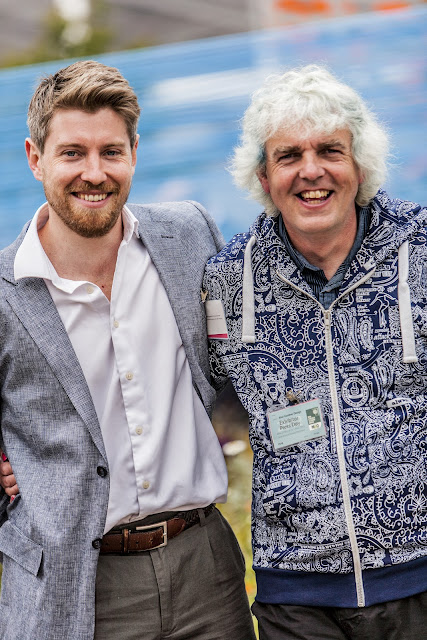 My wonderful immediate neighbour was Alan Gardener, his "Out Of The Blue" show garden was only bettered by his exceptional banter and camaraderie.  I've made a great friend there and consider myself very fortunate.  The supremely talented designer of the Renault garden, James Basson, has also become a great friend over a very short period.  He and his charming wife Helen were oases of calm amongst the furore, the pair a quintessentially English couple living in Southern France.  I want their life (and James' tweed 3 piece). 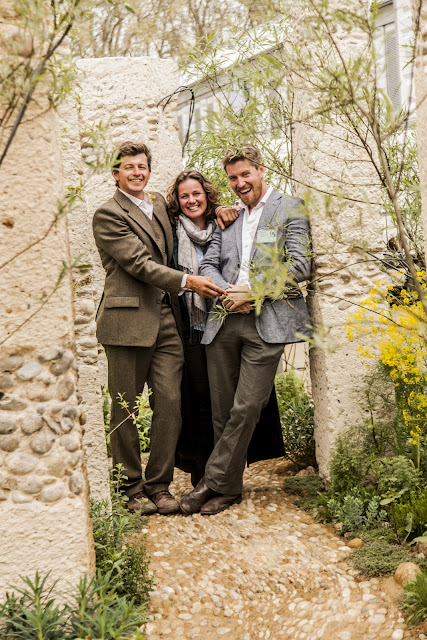 There are far too many people to mention and thank, to be honest it's too early to process many of the wonderful meetings and experiences over the past month.  However, I must say a huge thank you to the RHS for their support and good nature.  Everyone involved was simply charming and helpful, without their help none of this could have happened.  I've got the bug, sign me up for next year and I hope to see you all there. 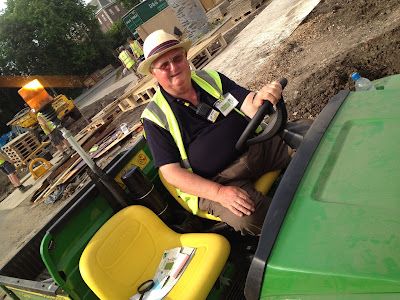 Below is a short film I made to capture the week:

Posted by Marshall Murray at 05:10 No comments: