An Autumn in France 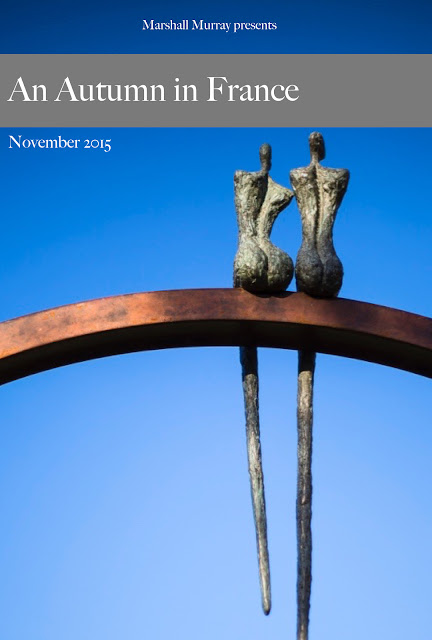 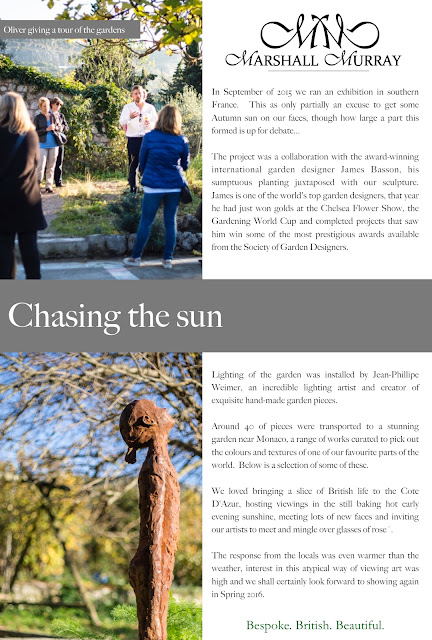 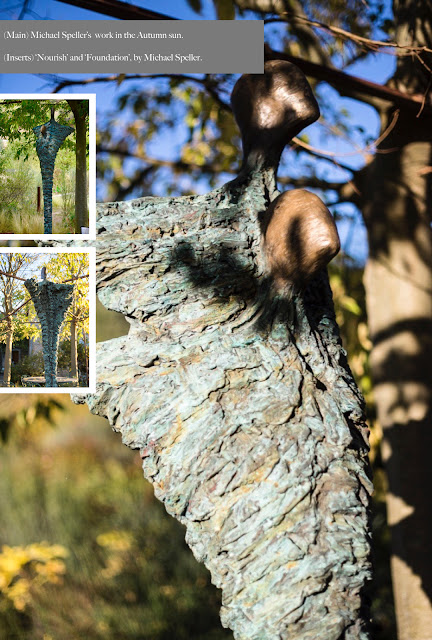 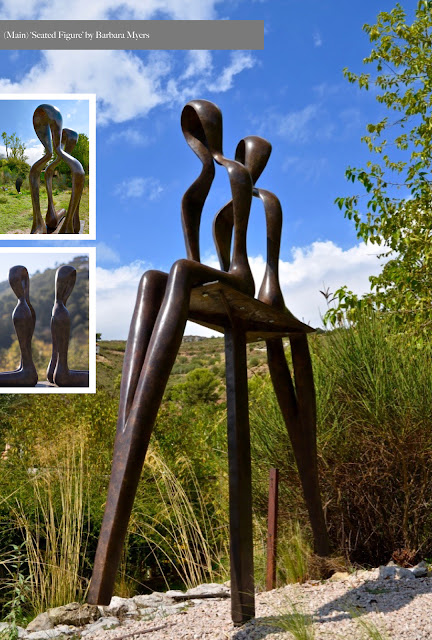 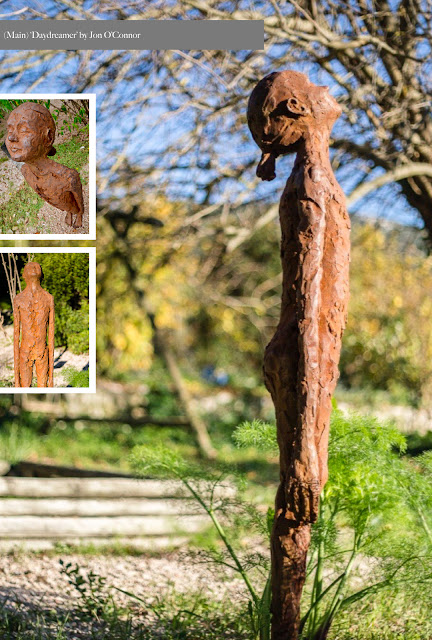 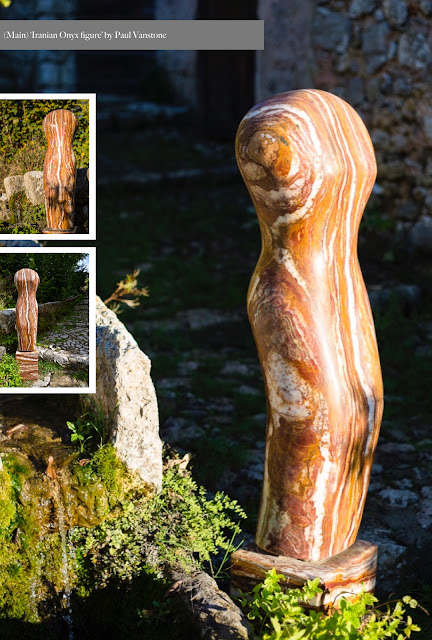 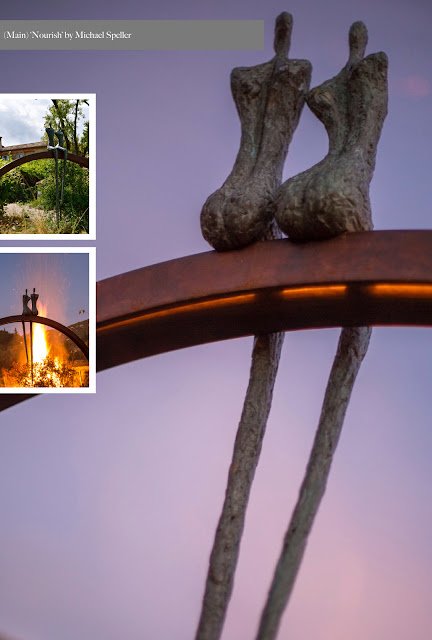 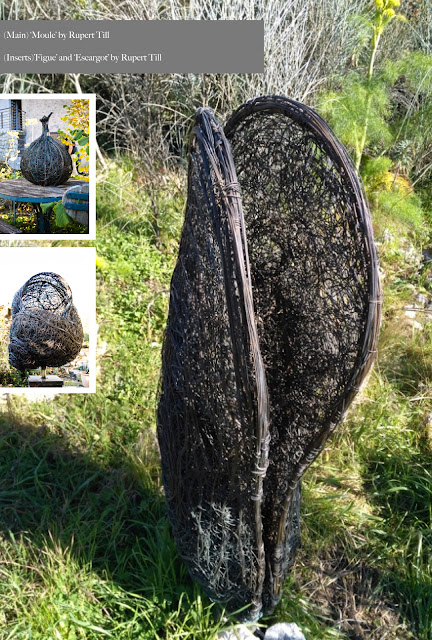 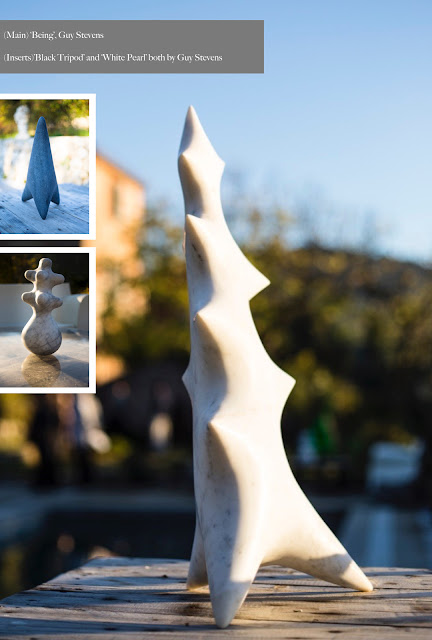 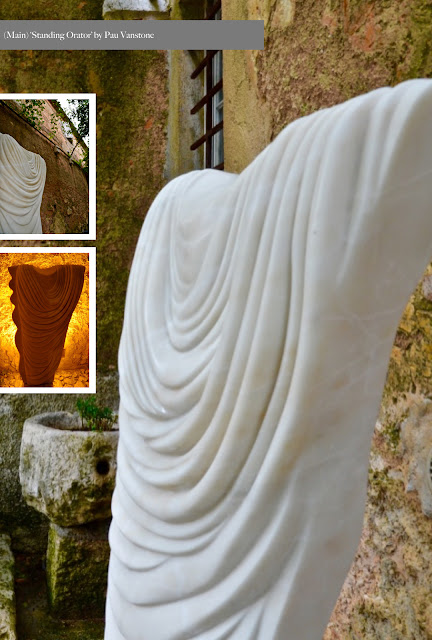 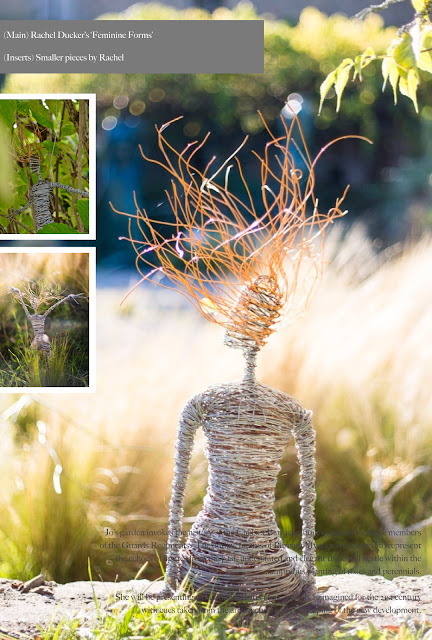 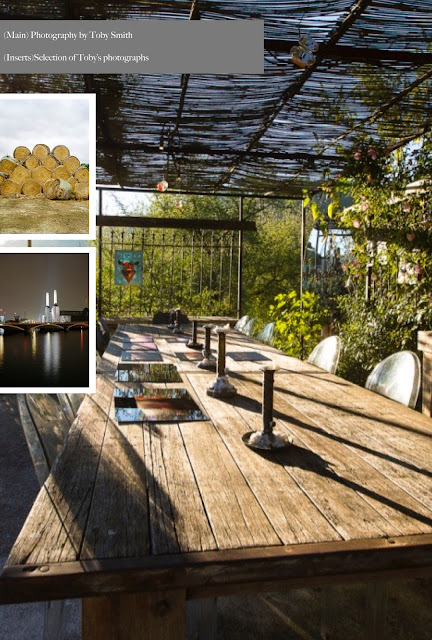 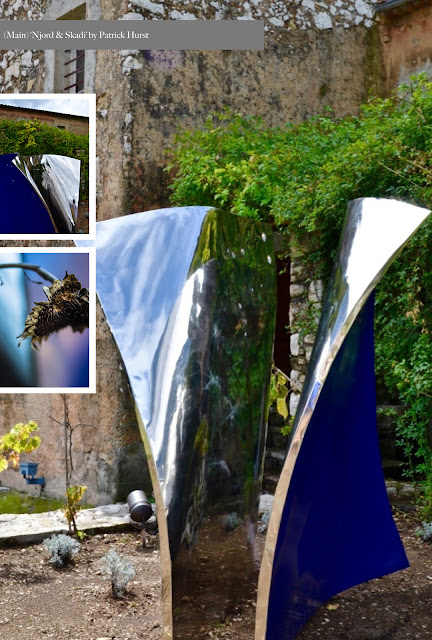 Posted by Marshall Murray at 10:00 No comments:

A Place in the Sun 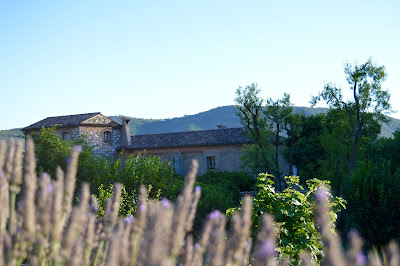 Well, summer is winding down a little over here in the UK, so in a bid to get some winter sun we are upping sticks and going to France!

Fine, this is not the whole picture - there are a whole host of reasons why we're setting up a sculpture garden in France.  There is the opportunity to work with one of the world's top garden designers, the highly decorated James Basson.  He started working on the gardens a decade ago, so to slot our sculpture into this mature and stunning space has been a joy.

The house itself is gorgeous, an old stone farmhouse with various terrace, loggias and enclaves, set in the rolling hills of the cote d'azur. 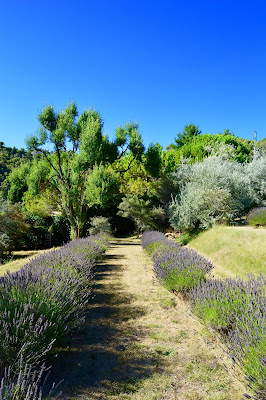 Collaborating with James and I is Jean-Philippe Weimar, creator of some of the most stunning and unique light fittings I have ever seen.  Handblown glass, brushed copper tubes that make the light appear grown rather than made, everything is create in specific response to each project.

If you would like to learn more, or to visit us sometime, then please feel free to contact us directly via enquiries@marshallmurray.co.uk,

Posted by Marshall Murray at 08:25 No comments: 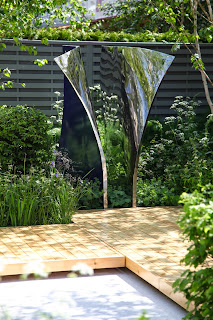 The show is in full swing and the garden is looking amazing! Alan's garden is clean lined and elegant, with soft colours repeated throughout the planting.

Judging is this morning, so we're keeping everything crossed for Alan.

Hope to see you at the show this week! 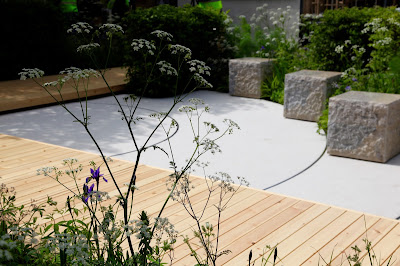 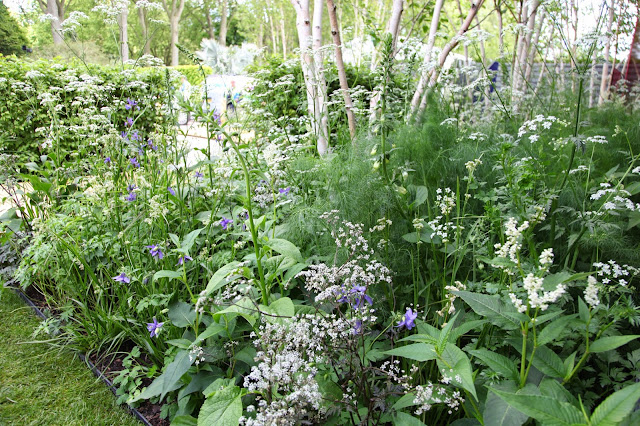 Posted by Marshall Murray at 00:20 No comments:

Wire pieces by Rupert Till. 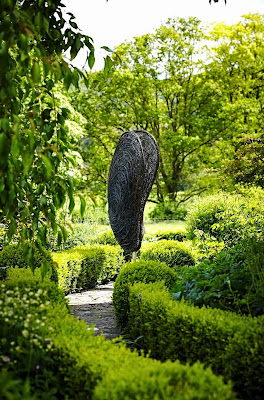 I love the wire figures of Rupert Till.  His work is a collection of natural forms, primarily animals to date but with a recent steer towards geometry in nature; snail shells, mussels (as right).

Created from twisted bronze and copper wire, they seem like three dimensional sketches; raw and visceral with a real sense of movement and energy.  Over time the colours gradually change, each piece completely unique by the very nature of his medium.

We have a number of his pieces on display at our sculpture garden, and he'll also have a larger stand at this year's Chelsea Flower Show.   I'd urge you to have a look at his gallery page here, as ever I'd love to hear your thoughts, 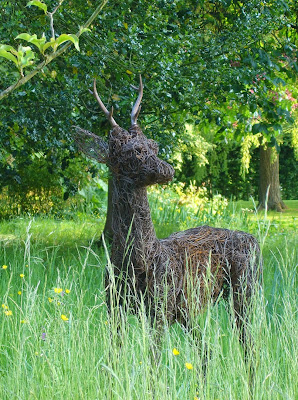 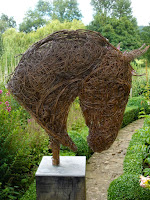 Posted by Marshall Murray at 05:17 No comments:

Images of our finished piece!

Our commission for the Viking River Cruises garden is finally complete!  A huge amount of time spent cutting, welding, hammering and polishing over the past few months has resulted in something we're hugely proud of.

Patrick Hurst has created something wonderful, a fusion of the classical with the contemporary, the Viking myth of Njord & Skadi with lines and mirror-polished steel.  It is the marriage of two forms; each an abstract response to the homes of these two Norse gods.  Made from two sheets of mirror polished stainless steel standing parallel to each other, the piece imposes itself onto the viewer at a height of 2 metres, painted a deep inky blue on the internal faces representing the deep blue of the sea and the darkness of the starry night sky.
The profile of the sculpture resembles the prow of Viking's new ocean-going luxury liner, the steel picks out the materials of the garden, and there are already two ships named for Njord and Skadi in their fleet.

Alan Gardener's garden could not be coming at a more perfect time, with the launch of his upcoming television show 'The Autistic Gardener' mere weeks away.  In this show the award-winning garden designer leads a team of autistic green fingered amateurs will use their unique skills to transform neglected gardens across the country.

For more information on Patrick's piece you can contact us directly on enquiries@marshallmurray.co.uk, to see more of his work please visit his gallery page here.
Best,
Oliver
Director, Marshall Murray 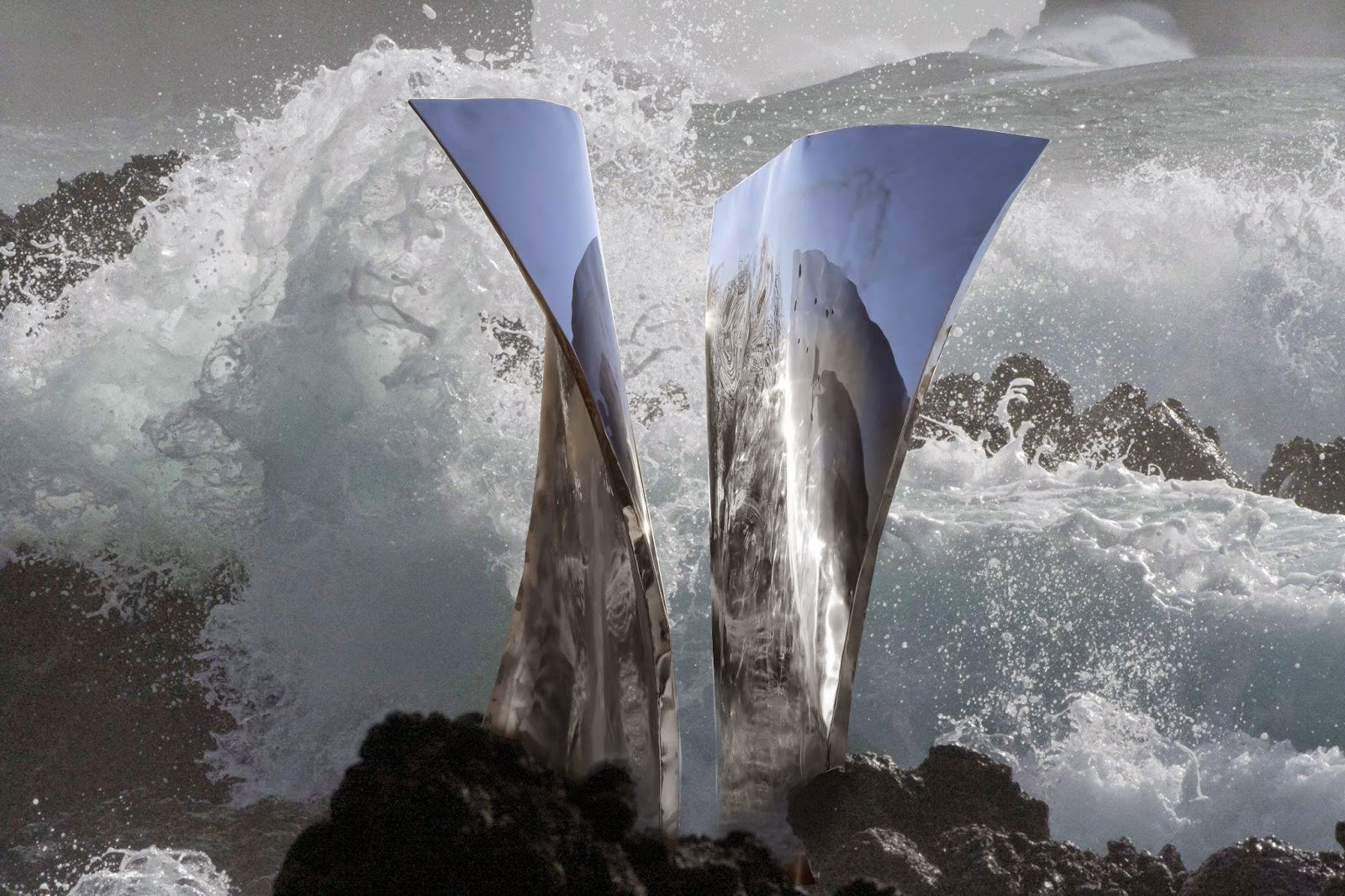 Posted by Marshall Murray at 03:50 No comments:

This Spring we shall be working with Barclays' Little Book Of Wonders to host a rather wonderful event at the Chelsea Flower Show. 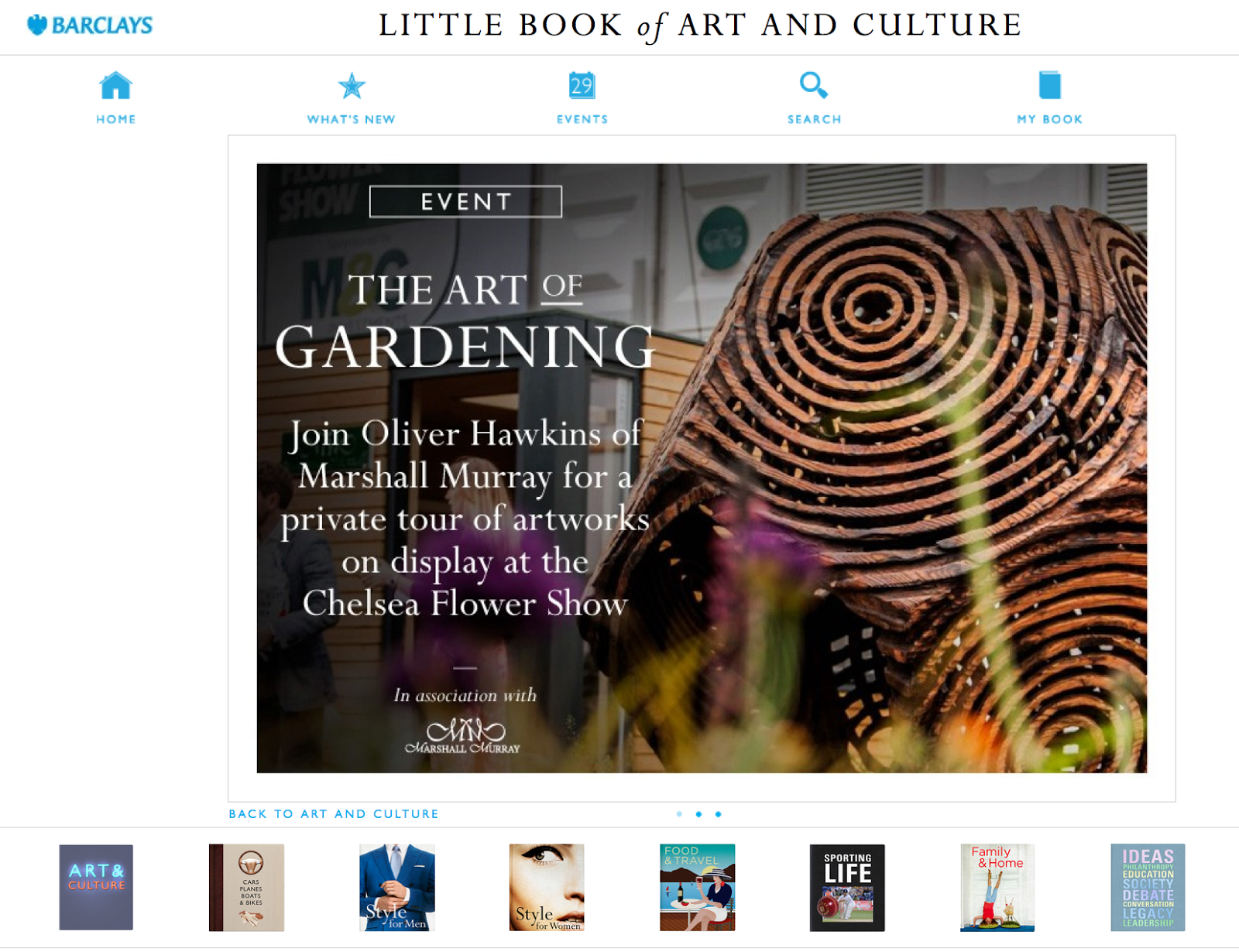 Our annual presence at the show, and network of garden designers and artists who have become close friends over our years of operating, gives us the ability to throw unique behind-the-scenes access to our clients.  Small groups of Barclays' clients will gain from this come May, with hosted trips around the show and introductions to the many artists and designers showcasing their talents.

Little Book of Wonders offers a selection of events and features from Barclays in partnership with a carefully selected group of luxury brands, on a fully complimentary basis. 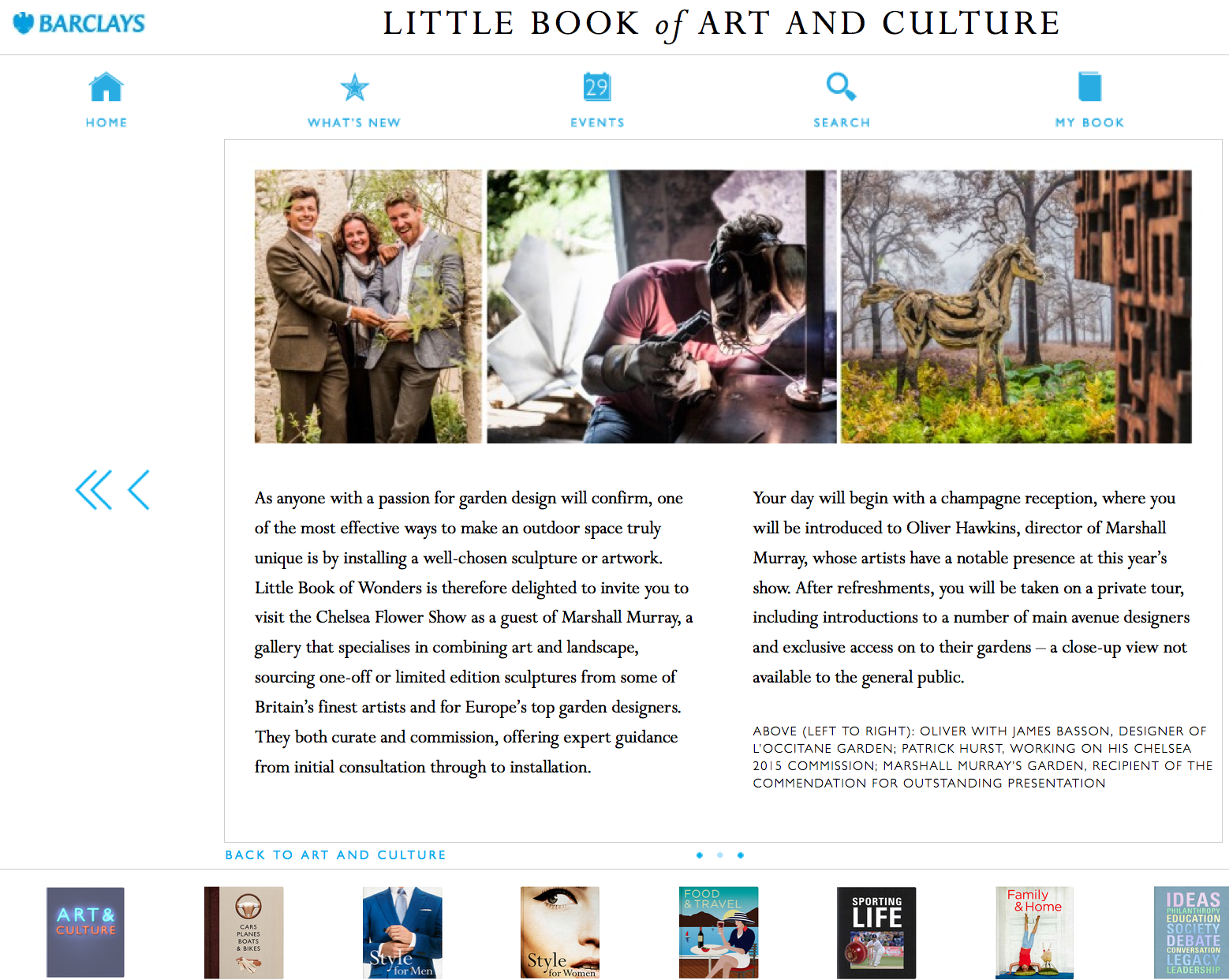 Whether you want to travel to remarkable places or invest in fine wines, collect contemporary art or meet some of the world’s best writers,  there are events here for Barclays Wealth clients with assets over certain levels.  If you are a Barclays client then please speak to your private banker about eligibility.

We shall of course be keeping you up to date with all things Chelsea, and hope to see you there!

Posted by Marshall Murray at 06:56 No comments:

Behind the scenes of our Chelsea Flower Show commission.

Well, work continues apace at Patrick Hurst's studio.  We're around 60 days from the Flower Show and the piece is coming together rather well.

Here's a short video showing his progress.
Posted by Marshall Murray at 08:19 No comments:

Well, the days are getting longer and, after months of wearing at least 5 layers, my thoughts are starting to turn to Spring.  This one promises to be a fun one.

I was contacted last year by a wonderful garden designer, the rather appropriately-named Alan Gardener.  He will soon be seen on Chanel 4's prime time show "The Autistic Gardener", and had been selected by Viking River Cruises to design their show garden at this year's Chelsea Flower Show. The brief was to commission a new piece of art inspired by some element of the Viking pantheon of Gods.  What a fantastic brief, and the clean and modern aesthetic of the garden drawings were exactly up our street.

I selected a number of artists who worked in mediums that would compliment the materials of the garden and, after a very difficult tendering process with some fantastic submissions, ended up selecting a piece by the fantastic Patrick Hurst. 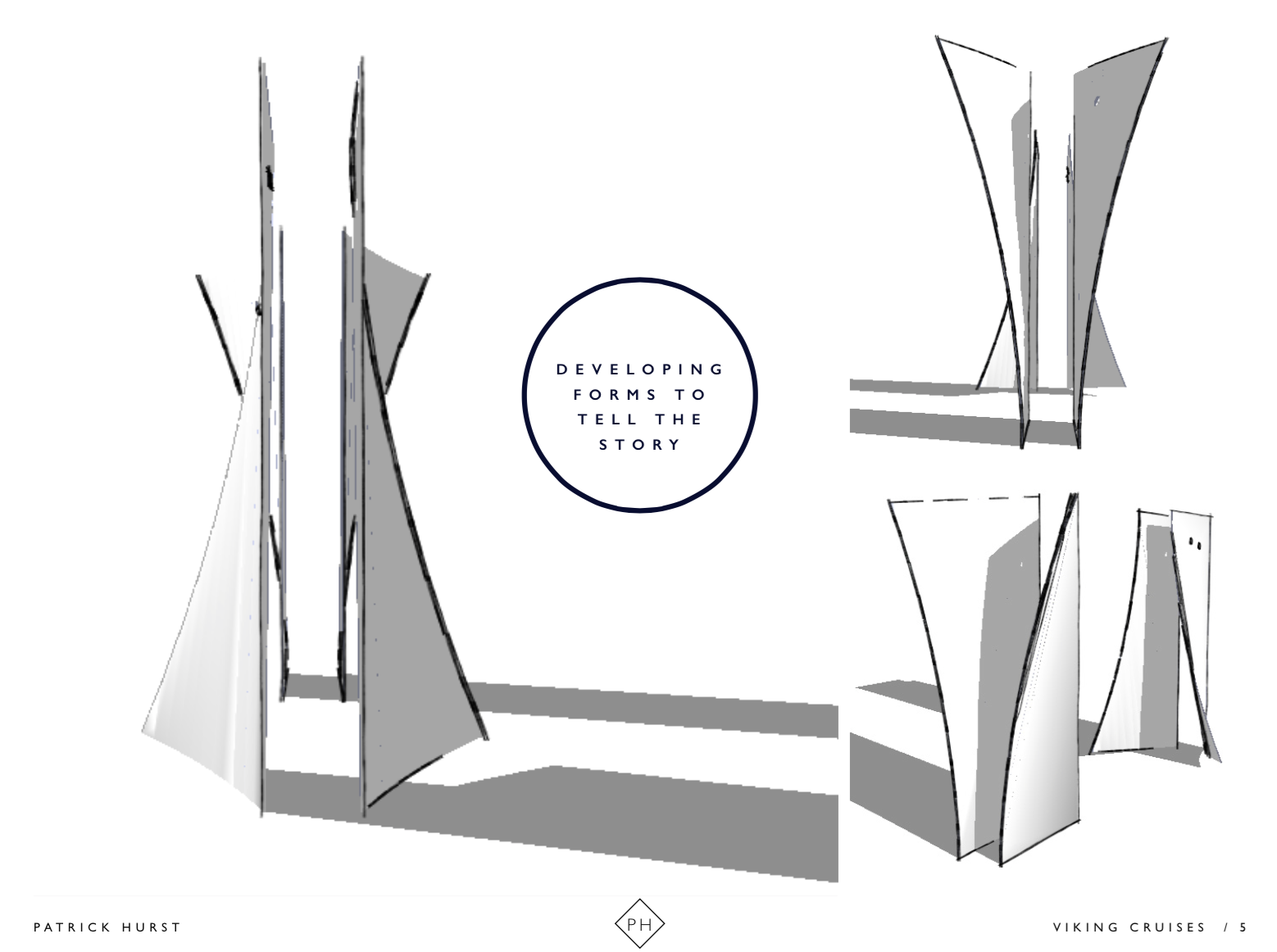 Patrick was inspired by the story of Njord and Skadi, the God of the sea and Goddess of the Mountains.  The giantess Skadi journied to the halls of the Gods to seek revenge for the death of her father, but was instead persuaded to accept reparations.

Rather hysterically this in part involved the Gods making her laugh, which Loki managed by tying one end of a length of rope to his testicles and the other to a goat, with whom he then engaged in a tug of war.

The other reparation was her choice of God to wed, chosen based on looking at their feet alone.  She mistakenly selected Njord, with whom she had a rather short and incompatible marriage...

"They first went to live at her father’s home in Jotunheim. However, the howling of the wolves and the wind were too loud for Njord to sleep, and after nine nights they left. Next they went to his home at Noatun, but Skadi could not sleep there for the crying of the seagulls, and flashing of the sun on the waves irritated her. They parted amicably, and agreed to live separately, each at his or her own hall, and to visit regularly."

Odin later turned the pair into a constellation of stars, so that they could be together somewhere both could live. Patrick played with two forms, each an abstract response to their homes made from two sheets of mirror polished stainless steel standing parallel to each other on a stainless steel square base, painted a deep inky blue on the internal faces representing the deep blue of the sea and the darkness of the starry night sky.

Over time this has evolved into one form combining both the mountain and wave shapes, with their constellation punched through the steel.  The profile of the sculpture resembles the prow of Viking's new ocean-going luxury liner, the steel picks out the materials of the garden, and there are already two ships named for Njord and Skadi in their fleet. 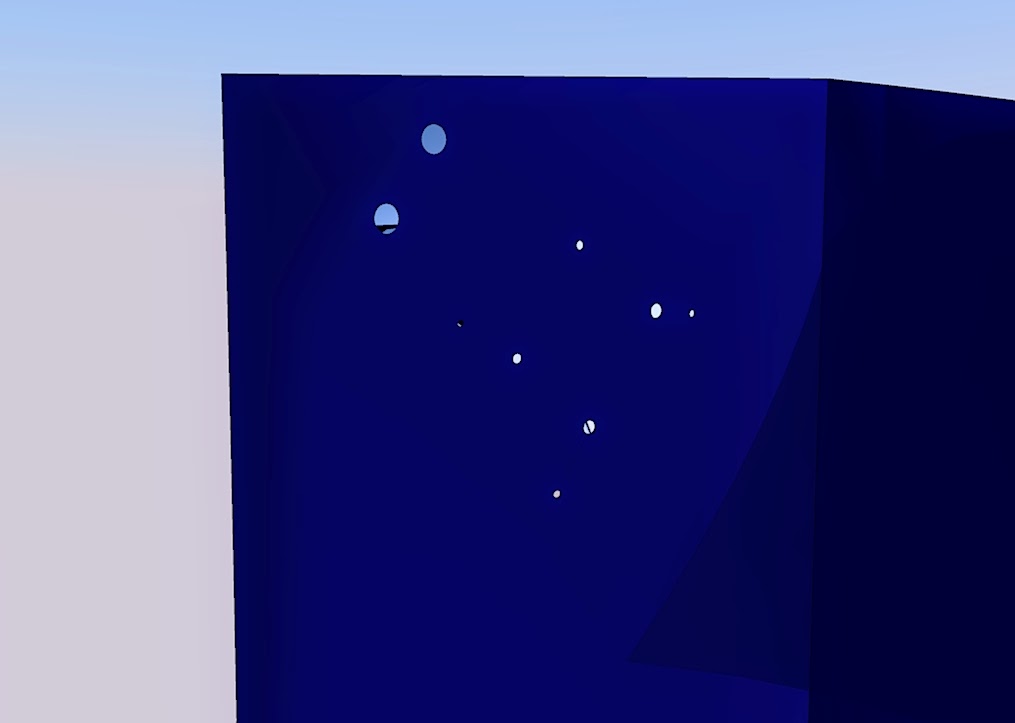 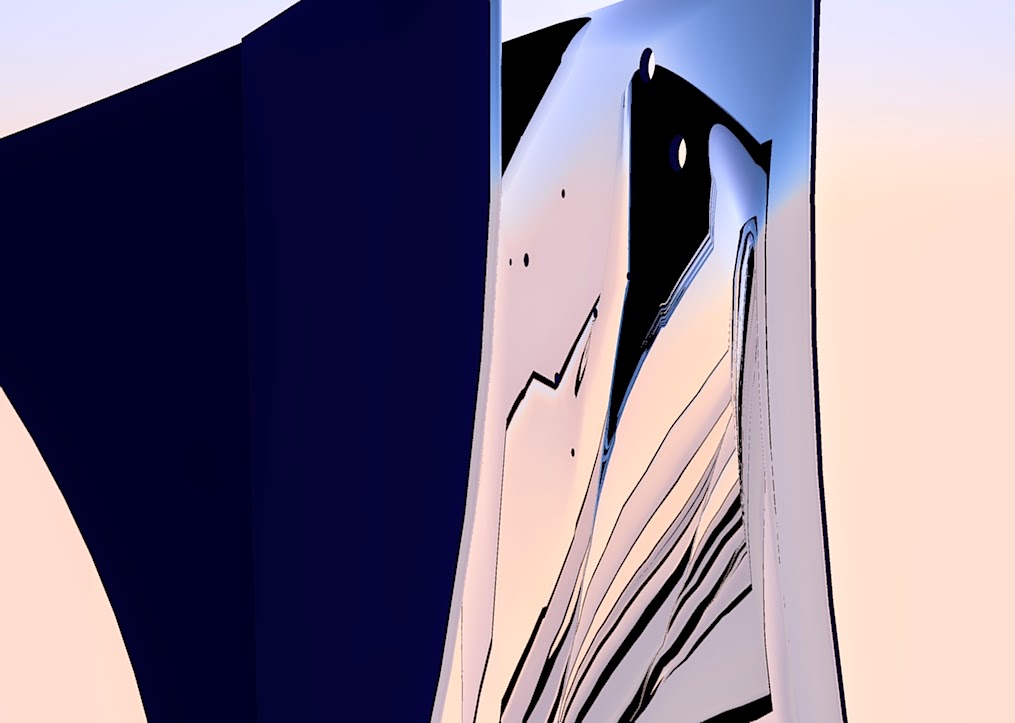 Finding the ideal piece and place for a garden is what why I founded the gallery, and this feels like a perfect example of what we do.  Working with such a fantastic designer and world-class cruise liner at the most prestigious exterior design show in the country has been a genuine pleasure.

Patrick is now hard at work building the piece and I shall keep you updated with his progress via this blog and our social media pages. I sincerely hope that we shall see some of you at the show where you can see the end result of a lot of hard work from all sides.  You can see more of Patrick's work at our sculpture garden in Kent, and if either the process of commissioning new artworks or the purchasing of limited editions from some of the country's best artists interests you then we can be contacted via our website.

Oliver
Posted by Marshall Murray at 10:38 No comments: